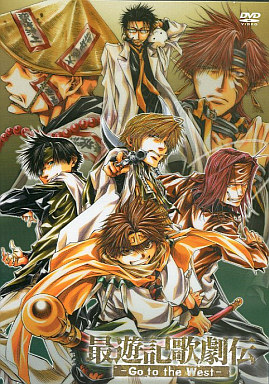 Saiyuki Musical: Go West (最遊記歌劇伝－Go West－Saiyuki Kagekiden Musical Go to the West) is the first musical of the series. It was premiered on September 13 - 21 2008. The story takes place 3 years before their journey, their Journey to the West and Rikudo arc.

Having been assigned by the human elders the mission of stopping a mystical plague that has afflicted the Youkai with madness, Genjo Sanzo assembles his team of Youkai warriors, desperately hoping that the disease will not affect them. He sets up qualifying tests that will help him determine the loyalty and worth of Cho Hakkai, Son Goku and Sha Gojyo. The team then journeys west to rid the land of madness.

In the beginning of the musical, we can see our heroes reminiscing their past. Son Goku inside his cage, Sha Gojyo who is longing for the love of his stepmother and Cho Hakkai was still in the orphanage and hoping to be reunited with his sister. Then we see Genjo Sanzo in the middle reminiscing when he became a Sanzo and chose a banishing gun as his weapon. And later on we see Sanzo who is annoyed by a call of a voice and found Goku and took him with him.

The next scene is we see Goku and Sanzo travelling to set out to find Sha Gojyo and Cho Hakkai. They find themselves attacked by a band of youkai and during the scrap; they run into the other two. After defeating the demons, Sanzo tells the three of them that they are heading west and their story begins.

The following scenes are Dokugakuji who is giving a report to Kougaiji about the Sanzo party. Kougaiji is determined that they will stop them as he dedicate his fight for his mother while we see Dr. Ni observing them. While in heaven, Jiroushin gave the news to Kanzeon Bosatsu that The Three Aspects already ordered the Sanzo party to go west and everything is finally starting. Kanzeon Bosatsu responded that the Sanzo party already started long time ago (500 years ago) and everything will start again as she’s looking forward to their splendid performance. After that scene, we see Rikudou defeating youkais.

Later on, we see Jiroushin and Kanzeon Bosatsu playing board game when Jirosuhin asked her if why she asked the Sanzo party to set on a journey. Kanzeon Bosatsu responded that in order for them to achieve the true goal she must train them and everything will be interesting. She also stated that they are nothing special but they are just happening to live and their painful past was what binds them all together.

Back 3 years, The Three Aspects ordered Sanzo to capture the criminal Cho Gonou who killed 1000 youkais in Hyakugan Maoh’s clan. Then we see Cho Gonou killing Hyakugan Maoh’s youkai servants as he looked at his hand saying sorry to Kanan for his hands is already dirty. Back to Sanzo, he was in the temple when the monks were complaining about Goku who is covered in mud. Sanzo scolded Goku to take a bath, and then the monks were whispering if why Sanzo took a child like Goku. Sanzo heard the monks, and he said to himself that he also want to know why did he took Goku. He reminisced the past when he first released Goku to his cage and telling him that he is annoying. He had no other choice to take Goku with him because he has no win to Goku. After reminiscing, Goku found Sanzo standing alone and the two set on journey finding Cho Gonou.

The next scene is we see Gojyo playing poker with two other guys until he won. The other two cannot accept that Gojyo won and was telling him that he cheated. Gojyo started to have a bad mood and decided to go home instead until the other two started picking a fight speaking of his hair and wine eyes telling that he is a taboo child (Half breed youkai). After that fight, Gojyo was on his way home until he found a guy with his innards out.

Gojyo helped Gonou, taking him to his house, securing medical care for him, and letting him stay while he healed. While living together Gojyo and Gonou learn more about each other and Gonou shows off his card-playing skills much to Gojyo's annoyance. Gonou talks about his love for Kanan, while Gojyo wishes that he could love someone someday. Gojyo never once asks about Gonou's affairs or his name. After he heals enough to walk, Gonou decides that it is time for him to take one last action. But before leaving he has one last talk with Gojyo, in which he tells him that his hair and eyes strike him as the color of blood. "That red that stained my hands... kept me grounded when I tried to escape the weight of my crimes. Your hair and eyes remind me of that. They're like a warning I suppose." What Gonou says strikes Gojyo deeply, as Gonou is the only one who has ever seen his red hair and eyes the way he does. Before Gonou leaves the house Gojyo asks him his name. He is about to answer when there is a knock on the door. Gojyo opened the door and it was Genjo Sanzo looking for a criminal name Cho Gonou. Gojyo tries to keep Gonou hidden, but Sanzo has already gathered information from the town and is sure Gojyo is hiding the fugitive. A fight ensues in which Gonou steals Sanzo's gun, and, begging for more time because he needs to finish something and then he runs off into the woods. As they think about how to find Gonou, Sanzo shares some of his wisdom and Goku muses about how Gonou didn't seem like a bad man. Gojyo makes a comment about how, once he has done what he intended to do, Gonou will probably die; "he seems the type." This disturbs Sanzo, who reveals that he never intended to kill Gonou, only capture him "But, a person who kills must also have the realization that they will be killed." Gojyo decides to join up with the two, stating that "if letting him die is the kind thing to do... then I... must be one selfish bastard."

Gonou wished to return to Hyakugan Maou's castle to retrieve Kanan’s body and to die beside it, but ends up encountering a survivor of Hyakugan Maoh’s clan. The youkai showed him his dead brother’s eye, which were ripped out by Gonou, and vows revenge upon him. Gonou responds with "We took away each other's families. We're almost even. Will giving you my eyes be enough? Be my guest. It's not as if I need them." He then proceeds to completely rip out his right eye and throw it at the youkai. Before he can fully rip out the left one, Goku tackles him and convinces him not to do it because he has beautiful eyes. Gonou then kills the youkai using Sanzo's gun, and together the four of them leave the place.

Sanzo and Goku take Gonou back to The Temple of the Setting Sun where he stands trial for murder. Sanzo, speaking on his behalf, pleads Gonou's case before The Three Aspects. Shortly thereafter, Sanzo tells Gojyo that Cho Gonou is dead and Gojyo was pissed about it. Then one day, while Gojyo is buying red apples, Gonou appeared at his side telling Gojyo that red is beautiful, and then Gojyo decided to buy four apples. They return to Sanzo and Goku, where Gonou announces that his name is now Cho Hakkai. Accused of lying, Sanzo explains that Gojyo jumped to his own conclusions and that Buddhism forbids killing; "surely you didn't think we'd execute a prisoner?" And then Cho Gonou announces to them that he will have a new life and his new name will be now Cho Hakkai.

Sanzo asked Hakkai how was he and his fake eye, and Hakkai responded that it is fine and from that day on he will live with Gojyo. Gojyo invited them to eat and Goku asked Sanzo to come. Before they go, Hakkai added to say that he will never forget about what he heard in Hyakugan Maoh’s castle and Sanzo’s voice. At the that time after Gonou killed the youkai who is a member of Hyakugan Maoh's clan they went to Hyakugan Maoh's castle only to find it burnt to the ground, and nothing remained. Gonou falls to his knees saying that he couldn't save her, and at Gojyo's insistence Genjo Sanzo recites a sutra, though before he does he states that "when I read a sutra... It's not for the dead."

And then Genjo Sanzo sings with memorable lines saying “Things that have form, will one day disappear, and to be born again after a far of reincarnation.” And the rest of the Sanzo party sings together showing the start before their journey to the west. After singing, Goku states that it’s a beautiful day when Gojyo suggested that it’s perfect for hiking while Hakkai suggested that next time they will bring lunches. Goku suggested a dessert to be bananas, and then Sanzo grumpy responded that he rather die than travelling with them. 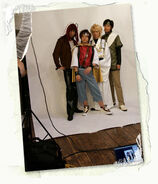 Add a photo to this gallery
Retrieved from "https://saiyuki.fandom.com/wiki/Saiyuki_Musical:_Go_West?oldid=21705"
Community content is available under CC-BY-SA unless otherwise noted.